For this word, the most important is the Other useful definitions by Creative, and Game-Changing Thinkers down below

In positive psychology, a flow state, also known colloquially as being in the zone, is the mental state in which a person performing an activity is fully immersed in a feeling of energized focus, full involvement, and enjoyment in the process of the activity. In essence, flow is characterized by the complete absorption in what one does, and a resulting transformation in one's sense of time. 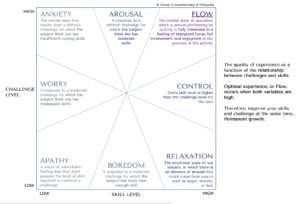 The flow state shares many characteristics with hyperfocus. However, hyperfocus is not always described in a positive light. Some examples include spending "too much" time playing video games or watching television and getting side-tracked and pleasurably absorbed by one aspect of an assignment or task to the detriment of the overall assignment. In some cases, hyperfocus can "capture" a person, perhaps causing them to appear unfocused or to start several projects, but complete few. Other related concepts are trance, hypnosis, hypomania and mindfulness.

Mihaly Csikszentmihalyi is a Hungarian-American psychologist. He recognized and named the psychological concept of flow, a highly focused mental state conducive to productivity.[1][2]

Here's a link to the book. 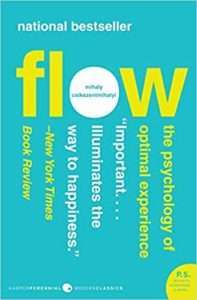