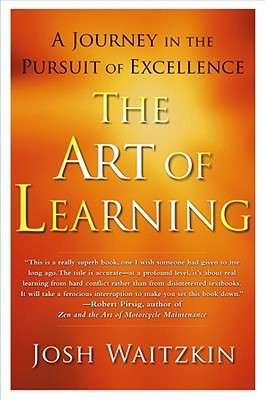 Young Chess prodige, Josh will become an International Master and the U.S. Junior (Under-21) Co-Champion at 16.

Soon after he will decide to master another Art and become the best at Tai Chi Chuan.

A real page-turner, this book explain his method, habits, technique and how to set goals and work hard to achieve what you want and need.

In The Art of Learning Josh reveals his unique systems of thematic learning, idea generation, building resilience, and mastering the art of performance psychology.

In 1993 Paramount Pictures released the film Searching for Bobby Fischer, based on the highly acclaimed book of the same title written by Fred Waitzkin, documenting Josh’s journey to winning his first National Championship. That same year, at 16, Josh became an International Master and the U.S. Junior (Under-21) Co-Champion. In 1994 he won the U.S. Junior Championship and placed fourth in the Under-18 World Championship.

Since 1997, Josh has been the spokesperson, and the architect of the Josh Waitzkin Academy, for Chessmaster: the largest computer chess program in the world.

And a great Mind Map Book Summary, thanks to the most clever Ethan Schwandt - The Mind Map Guy.